San Diego, California is a beautiful city on the Pacific Coast. Immediately adjacent to the Mexico border, San Diego is around 120 miles south of Los Angeles and home to approximately 1,381,000 residents. Known for its gorgeous weather and extensive beaches, San Diego is the 2nd largest city in California and the 8th largest in the nation. San Diego has 52 Community Planning Areas and within each of them there may be several smaller neighborhoods. Altogether sunny San Diego is home to over 100 varied and distinct neighborhoods.

Navajo is one of those 52 Community Planning Areas and includes the neighborhoods of Allied Gardens, Del Cerro, Grantville and San Carlos. Navajo is located in the eastern part of the city and is a rather hilly community encompassing around 14 square miles. Navajo is bounded by the San Diego River on the north, by I-8 on the south, by El Cajon and Santee on the east, and by La Mesa on the southeast. Del Cerro is an upscale neighborhood, home to around 2,300 residents, bordering Allied Gardens, College Area, Grantville, La Mesa and San Carlos. Del Cerro is adjacent to San Diego State University and Lake Murray.

The luxurious residential suburb of Del Cerro was developed between the 1950s and 1970s. The commercial center of the neighborhood is found along Del Cerro Boulevard and includes several professional services in addition to a fitness spa, dental office, Mexican restaurant, Windmill Farms, two liquor/deli stores and a Chevron station with a mini-mart. Home to the western end of Mission Trails Regional Park, Del Cerro does see a bit of tourism. Additionally, the community hosts a few annual events for its residents, including a Block Party with food, live music and entertainment for children, and a Fourth of July party at the private Del Cerro Park and Pool. There are 2 schools located within the neighborhood, Phoebe A. Hearst Elementary on Del Cerro Boulevard and Patrick Henry High located on Wandermere Drive. All of these wonderful features make Del Cerro a highly sought after address in the Navajo area of eastern San Diego, California. The homes for sale in Del Cerro vary in age, size, location, style, special features and therefore price. In Del Cerro of San Diego the average home price is around $579,000. Condos and townhomes can be as much as $649,000 but usually have a listing price closer to $373,500 and single family homes can cost $1.7 million, but average around $930,500.

If you would like to buy a home in Del Cerro, or you have questions regarding other real estate options in the San Diego area, please do not hesitate to contact us today for more information.

This family owned Allied Gardens home, boasts 3 bedrooms and 2 full baths. On a corner lot, in an award winning school district, this central located home is close to fre...

Never been sold since it was built 62 years ago - Outside looks a lot newer- 1 of the largest houses in this prestigious neighborhood with 3 car garage & 13 parking space...

This lovely 4bed/2.5bath home located in the highly sought after Del Cerro area in the Allied gardens neiborhood features a tastefully designed custom kitchen with corian...

Move in ready single-story home in the heart of desirable Del Cerro! Situated on a corner lot at the entrance to a cul-de-sac this 4 bed, 2.5 bath has ample natural light...

Single-Story, Cul-De-Sac, Pool, Spa, Huge Patio! This large estate is ready for another family after over 20 years of memories. Live at the top of the quiet cul-de-sac wi...

Incredible views All The Way To The Ocean from the living room, dining room, master retreat and deck! An impeccable Del Cerro Heights home, marble floors and fireplace in...

Del Cerro Hights is a hilly residential gated community that is centrally located close to just about every thing San Diego has to offer. This beautiful home has spectacu...

Based on information from California Regional Multiple Listing Service, Inc. as of . This information is for your personal, non-commercial use and may not be used for any purpose other than to identify prospective properties you may be interested in purchasing. Display of MLS data is usually deemed reliable but is NOT guaranteed accurate by the MLS. Buyers are responsible for verifying the accuracy of all information and should investigate the data themselves or retain appropriate professionals. Information from sources other than the Listing Agent may have been included in the MLS data. Unless otherwise specified in writing, Broker/Agent has not and will not verify any information obtained from other sources. The Broker/Agent providing the information contained herein may or may not have been the Listing and/or Selling Agent.

Looking for the perfect home in the perfect place? Chances are you'll want to check here first. 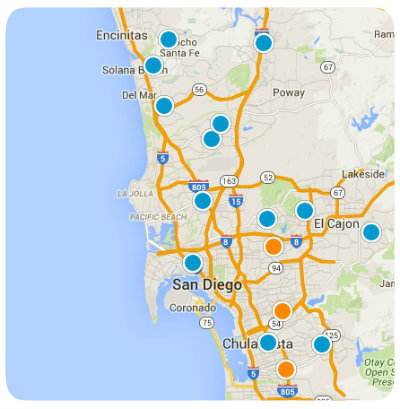