Thinking about buying a condo? Grant funds are now available providing up to 6 months of HOA dues! These funds are 1st come 1st serve and will likely go fast. If you're ready to buy let's see if you qualify. Give me a call or text to get started (619) 955-0488 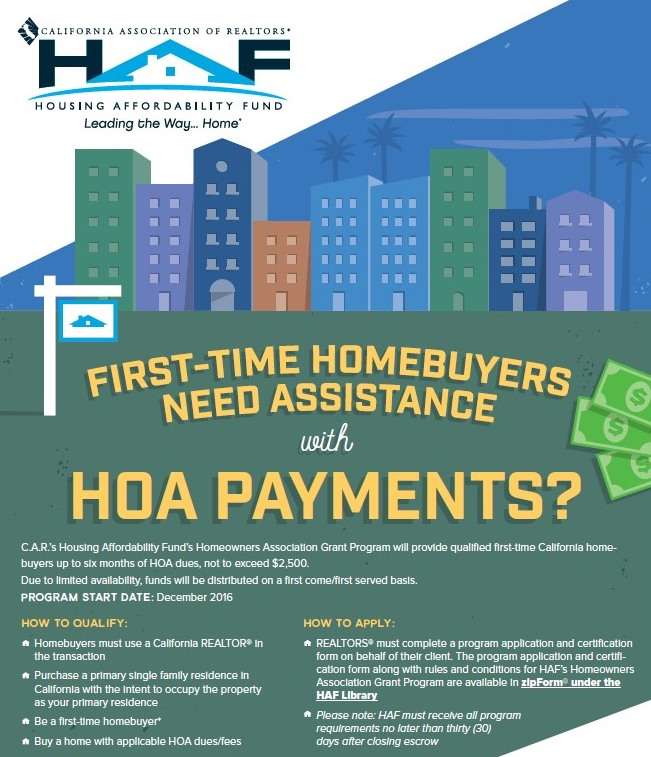 We all have careers that keeps us busy. Earning a living, and forging a professional path. None of which matters without family. These three ladies are the reason why I work so hard. Love them. 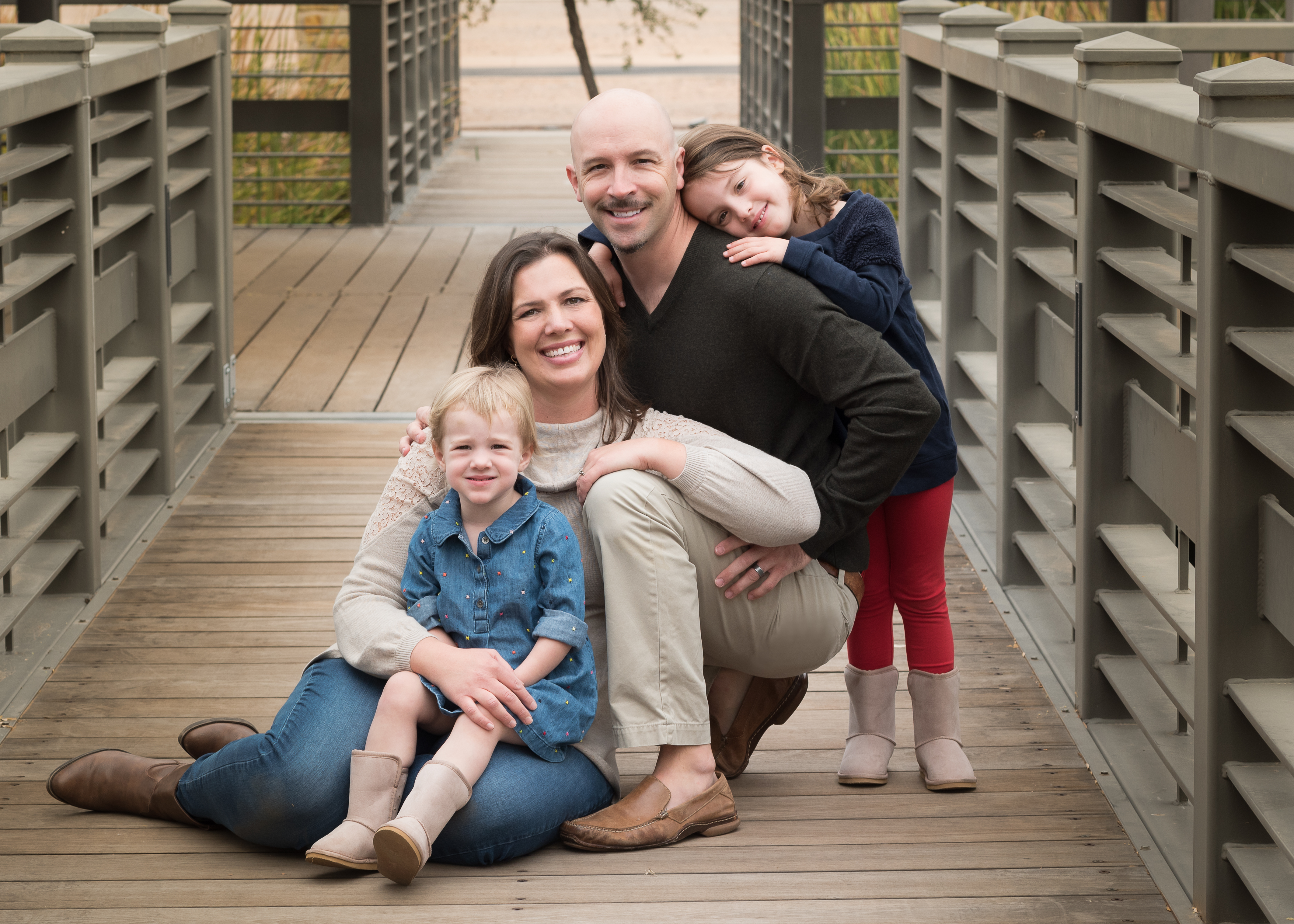 Posted in Community News
no comments yet

Are we in a bubble?

"Is this another real estate bubble?" For most that study the market the answer is NO. This is not a bubble. These rising prices are based on simple Supply & Demand. In San Diego, we have very few homes to choose from. At the 2007 peak there were nearly 25,000 homes for sale. Today there are less than 6,400 homes active on the market. For a city of 3+ million, that's low. The old statistic that people move on average every 7 years has now gone up to 10 years. One economist cites a major factor to the lack of inventory is Baby Boomers just aren't moving. 71% of Californian's 55+ yrs old have not moved since 1999, and 64% do not plan to move when they retire. Bottomline - Homeownership is a solid investment and if you don't currently own - do whatever you can to buy now. I'd be happy to help you. ~Norman (619) 955-0488 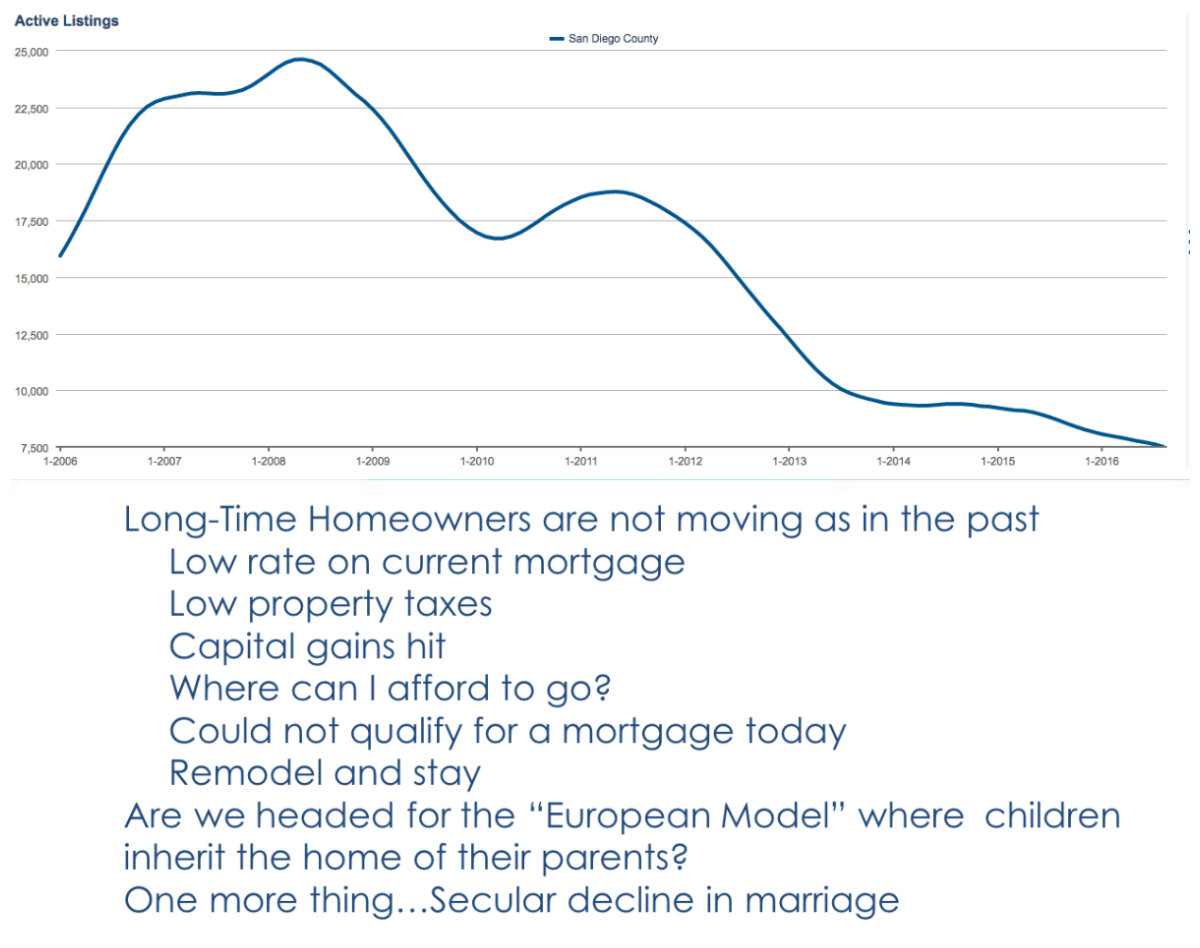 Posted in Buying a Home, Real Estate News
no comments yet

Hire A REALTOR ~Get A Leg Up On The Competition

As the demand for homes exceeds supply in markets across the U.S. and especially here in San Diego, homebuyers may feel like they are facing an uphill battle to find the right home this spring.

While many Buyers can search for homes on various websites from their own computers and mobile devices, a false sense of the market is created. That the homes are out there - just waiting to be bought. It isn’t until they start taking the first serious steps towards purchasing that  they realize a home on the computer today is likely sold tomorrow. The market is that fast.

In competitive markets like this, it’s important that homebuyers work with a Realtor.  Realtors have specialized knowledge of the market, know what is available, what is not available, and what will be available. Helping them through the challenges of finding the right home in a seller’s market. Hiring a Realtor that is focused on working directly with buyer, will make the difference between being a home-looker or a home-owner.

If you're ready to purchase, and want to hire a Realtor, a professional, someone that will make it happen... Call me.

Posted in Buying a Home, Real Estate News
no comments yet

We've been quite busy lately, as more and more sellers are deciding now is the time to sell. So I'd like to give you the 1st opportunity to learn about a few of the homes we are putting on the market in the next couple weeks.

Here's the deal... NOW is the RIGHT TIME to buy and sell. You may wonder how can it be right for both Buyers and Sellers, and let me explain.

Buyers- Why do it now? Because interest rates are at an fantastically low rate. We're talking 3.6% for a 30 years fixed mortgage. And I don't know if you've noticed but property values are going up and up. So you don't want to miss out on your own chance to build equity.  The best reason to buy now... rental rates are rising faster than home values. Meaning Landlords throughout San Diego are increasing rents higher and faster than we've seen before. Why put more money in someone else's pocket?

Sellers- Why do it now? The limited inventory we have in San Diego is pushing prices higher. Whether you want to sell in order to buy a bigger home or down-size to a smaller home... long-term financial planning in mind... it would be better to purchase your new home at a lower price today than waiting because the tax basis/cost to own will be larger in the future. At a time when you may want lower expenses. Additionally, we are experiencing great flexibilty from buyers that are certainly willing to work with you on a contingent sale basis. Meaning Buyers will give you the time to find another home, and give you an offer on your current home.

If you have any questions about your home or a home you're thinking about buying... just call. We are here to help.

Posted in Buying a Home, Real Estate News, Selling Your Home
no comments yet

"Oh, how times have changed."  At least that's what our parents and grand-parents keep saying.

For someone like me...still in my (late)30's, growing a family (wife+2 kiddos), maintaining a career (12+ yrs in real estate), and just having a life...this look at Non-Linear Life Stages doesn't look all that new or strange. Being part of the "younger" generation I've found that the path we take may not be as straight as it was for Grandpa and Grandma, but most of us still want and end up in the same place. A career. A family. A home of our own. 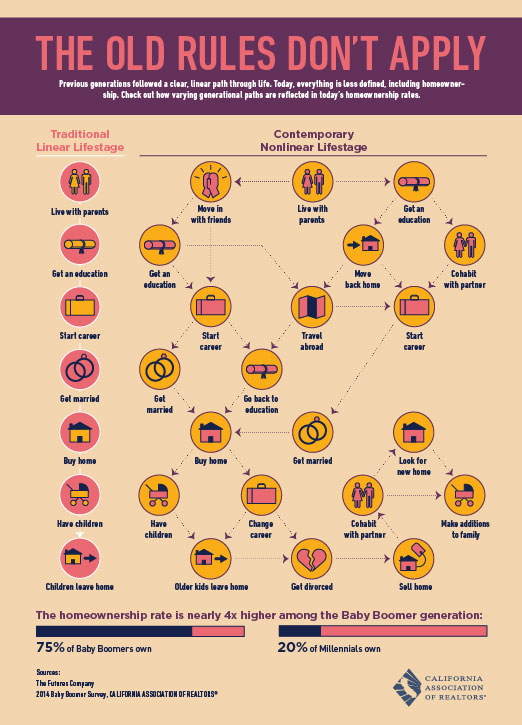 Posted in Buying a Home, Real Estate News, Selling Your Home
no comments yet

Posted in Selling Your Home
no comments yet

2016 STILL CHEAPER TO BUY THAN RENT

For San Diego, buying a median priced home with 10% down for a 30yr mortgage means buying a home in San Diego is 10 percent cheaper than renting.

Rental rates have risen faster than home prices in many markets. Buying a home is 36 percent cheaper than renting nationwide and now is the best time to buy since 2012, according to Trulia. Buying is cheaper than renting in every one of the country’s 100 largest metro areas.

The disparity could likely grow as rents are expected to increase by 8 percent next year, according to a Rent.com survey of property managers. 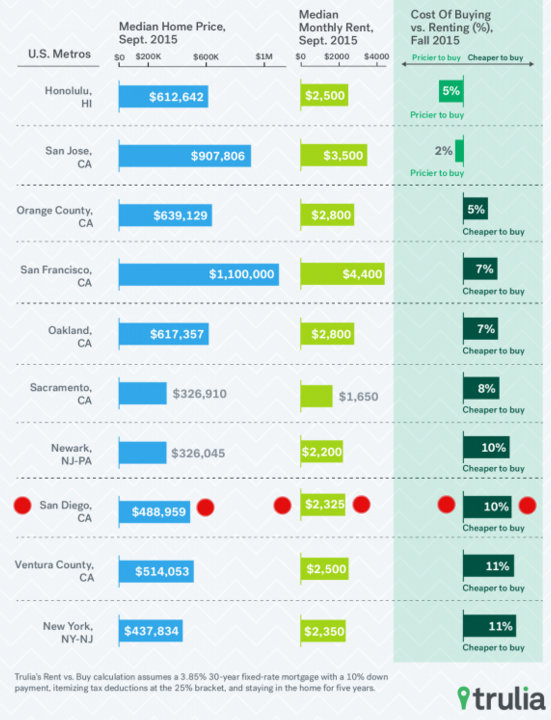 Posted in Buying a Home, Community News, Real Estate News
no comments yet

The misconception many potential buyers have is the that it costs more to buy a home. While initially, it does take more money to buy a home (which requires down payment/closing costs) than a rental (which requires a security deposit) - If you examine the money spent it's often cheaper to own on a monthly basis with the after-tax savings of the write-offs and interest deductions. And now a recent study finds that you'll likely break even on the costs in less the 2 years.

On average, Americans can break even on a home purchase in less than two years in 70 percent of U.S. metros, thanks to low interest rates, healthy home value forecasts, and the relatively fast pace of rents in recent years, according to the analysis of the fourth quarter of 2015.

The analysis found that, generally, one does not need to live in a home for even two years to make purchasing the home more financially advantageous than renting it over the same time period.

Boston, one of the nation's youngest cities, has a break even point of just over three years. San Francisco's break even point is 2.9 years, up from 2.6 years in the fourth quarter of 2014. Both markets are attracting young people following jobs, and many of those remain renters despite record-high rental costs.